Herring runs are an integral part of their surrounding landscapes. Southeastern Massachusetts, including Plymouth and the Monument River, is a globally rare eco-region called the Atlantic Coastal Pine Barrens (http://www.epa.gov/wed/pages/ecoregions.htm). Pine Barrens are underlain by sandy, nutrient-poor soils characterized by a forest of pitch pine (Pinus rigida) and blackjack oak (Quercus marilandica), maintained historically by fire. 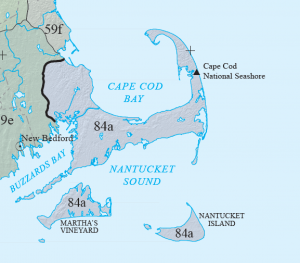 Cape Cod and an inland area from Plymouth to the head of Buzzards Bay are terminal moraines and outwash plains formed by the continental glacial ice sheet. Soils are well-drained on the sandy outwash plains. Some of the unique ecological features that distinguish this ecoregion include its moderate maritime climate, stunted pine and oak forests, and numerous kettle ponds.

This region 40 miles south of Boston contains the world’s second largest expanse of Pine Barrens remaining in the world. Massachusetts has lost approximately two–thirds of the signature pitch pine-scrub oak forests to development (http://www.pinebarrensalliance.org/). Once extending from Maine to southern New Jersey, intact coastal pine barrens habitat now covers only about 10% of their former range and has become fragmented and isolated. The Nature Conservancy has recognized the area, including its herring runs as one of the most significant ecosystems in the northeastern United States (Masterson and Walter, 2009).

The herring run is a state-designated Area of Critical Environmental Concern (ACEC). That designation notes that it “supports one of the Commonwealth’s most productive river herring populations. DMF [Department of Marine Fisheries] has monitored this run at the Monument River fishway for over 20 years using electronic and visual counts to estimate population size, which has ranged from 91,000 fish in 1980 to 672,000 in 2000.” Following steep declines to below 100,000 in 2006 and 2011 there is an upward trend (to 278,000 in 2014, Figure 7).

Because of its size and accessibility, this population is the primary source of mature adult alewives for Marine Fisheries’ stocking program. The construction of the [Cape Cod] Canal [begun in 1909 and opened in1914] inhibited upstream access by intercepting the stream’s natural channel. A series of weir-pool and notched weir-pool fishways, which are integrated within the stream’s artificial [canal-side]channel, allows river herring to migrate upriver to spawning sites [in Great and Little Herring Ponds] in Bourne and Plymouth ” (MA Div of Marine Fisheries, 19XX).

These data are from the electronic counter along Route 6, which is maintained and reported by the state Massachusetts Department of Marine Fisheries (DMF). HPWA volunteers do an additional hand count every spring at the count station (bridge) on Sandy Pond Road near the entrance to Great Herring Pond.

River Herring are an important component of a healthy coastal and riverine ecosystem. The Buzzards Bay National Estuary Program describes the importance of river herring to coastal and freshwater ecosystems: “Not only are these fish historically important as a fishery in Buzzards Bay, but adult and juvenile herring are also an important food species for many recreational fish (like striped bass and bluefish), whales, and coastal birds such as ospreys and the Roseate tern.” 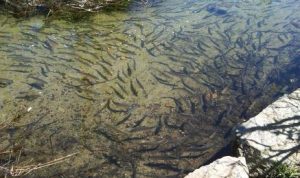 River herring are a key food of Atlantic cod. Recent information suggests that river herring are a vital resource for nearshore cod populations, and without a substantial recovery of river herring, coastal fisheries will remain depleted (Ames and Lichter, 2012). Ames and Lichter (2012) suggest a complex relationship between gadid species (Atlantic cod, haddock, pollock and white hake) and herring populations. The collapse of the Atlantic cod on the coastal shelf of the Gulf of Maine appears to be directly related to the collapse of alewives. They found that groups of cod and other gadidae were centered near rivers with alewive spawning runs, and disappeared during the 1950s after alewives declined locally.  “The study suggests that providing alewives with access to their historical spawning areas will enhance the recovery of cod and other gadids and perhaps encourage the reformation of [fish stocks] along the northeastern New England coastal shelf” (Ames and Lichter 2009).

In the watershed, the two Herring Ponds and connecting rivers comprise one of the most important spawning areas in the state, important to the sadly diminished herring-cod fisheries. “Blueback herring spawning requirements differ slightly from those of the alewife. They spawn in the main stem sections of rivers and streams and do not ascend into ponds or lakes. Sea-run alewives have evolved to take advantage of zooplankton production during times of the year when lakes and ponds are most productive (summer and fall). Alewives spawn in the spring, resulting in an abundance of small (less than 1- 6” in length) alewives for resident species to prey upon. Alewives leave the freshwater environment when zooplankton production declines (fall and winter). Therefore, lake productivity can accommodate alewives and freshwater species.” Source: http://www.maine.gov/dmr/searunfish/alewife/

​“In Massachusetts, more than 100 coastal rivers and streams are home to the anadromous [born in fresh water, spends most of its life in the sea and returns to fresh water to spawn] alewife (Alosa pseudoharengus) and blueback (Alosa aestivalis) herring. Known colloquially as “river herring”, these fishes are ecologically-important because they are forage for many marine and freshwater fish predators such as striped bass (Morone saxatilis), cod (Gadus morhua), and yellow perch (Perca flavescens) as well as birds (Loesch, 1987). In addition, they are a key link in the transfer of nutrients from freshwater to marine systems and vice versa (Mullen et al., 1986). River herring provide recreational and cultural benefits to citizens who value them for food and bait. In recent years, river herring abundance in several runs throughout Massachusetts have declined to historical low levels. The declines prompted the Massachusetts Division of Marine Fisheries (DMF) to establish in 2005 a three-year moratorium on the sale and harvest of river herring throughout [the] state. In addition, the National Marine Fisheries Service has listed blueback herring and alewife as ‘species of concern.’” (Atlantic States Marine Fisheries Commission, 2012)

“Populations of alewife and blueback herring are in serious decline along the Atlantic coast and face numerous threats. By restoring river herring, we can help protect an entire ecosystem.” (The Pew Charitable Trusts, 2013)