In the past decade Massachusetts trees have been subjected to serious attacks by invasive insects from Asia that have no predators and quickly spread and damage our forests and even our residential trees. 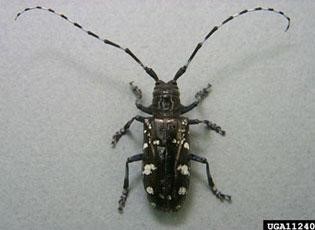 In 2008 an Asian Longhorned Beetle (ALB) infestation was discovered in Worcester and quickly spread throughout the county infecting many hardwood trees and causing over 25,000 trees to be destroyed. The ALB, (Anoplophora glabripennis) is an invasive wood-boring insect that feeds on a variety of hardwoods including maple, birch, elm, ash, poplar, horsechestnut, and willow, among others. Native to China and Korea, the beetles are approximately 1.5 inches long and shiny black, with white spots on their wing cases. They have black and white antennae that can be up to twice as long as their body.

The only way to control the ALB infestation is to remove infested trees and destroy the wood by burning or shredding. All hardwood material in the 110 square miles Worcester quarantine area cannot be moved out to prevent the spread. A smaller infestation was found in Boston in 2010, but fortunately was eradicated. The ALB has not been found in our county.

The emerald ash borer (EAB) is a small invasive green beetle responsible for the destruction of tens of millions of ash trees in 30 states. The emerald ash borer was introduced to the United States in the late 1990’s and has steadily spread and expanded its range. The invasive pest was first detected in Massachusetts in 2012. Since its initial find, the EAB been detected in eleven counties including Plymouth. Females lay eggs in bark crevices on ash trees, and larvae feed underneath the bark of ash trees to emerge as adults in one to two years. An infestation can be identified by the serpentine tunnels under the bark. Everyone can do their part protecting our ash resources by avoiding moving ash wood materials. Do not transport firewood. Fortunately for us ash trees are not common in the pine barrens.

The latest invasion of destructive bugs from Asia is the Spotted Lanternfly. Adorned with pale, brownish gray wings, black dots and a scarlet undercoat, the spotted lanternfly is a beautiful insect. It’s also an invasive species and a rapacious consumer of plants that has a particularly strong appetite for apple trees, plum trees and grapevines. 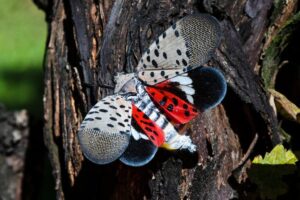 Spotted lanternfly (Lycorma delicatula, “SLF”) is an invasive sap-feeding insect from Asia that was first found in the United States in 2014, in the state of Pennsylvania. While the main host plant of this pest is tree-of-heaven (Ailanthus altissima), spotted lanternfly attack a variety of trees, shrubs, and vines, and has the potential to impact a broad range of agricultural commodities, including apples, peaches, grapes/wine, maple syrup, as well as the ornamental nursery industry.

Adults have brownish-gray forewings with black spots, and appear dull when at rest. When disturbed, the lanternfly will hop or fly away, revealing bright red and white hindwings. It overwinters as a gray egg mass laid on any smooth surface. The egg mass resembles mud. The adults and immature stages of this species damage host plants by feeding on sap from stems, leaves, and the trunks of trees. Adult lanternflies then excrete honeydew, which causes sooty mold and attracts other insects that may also cause damage to the plant.

While only individuals of the spotted lanternfly have so far been found in Middleborough and Dartmouth, we should be on the lookout for this very invasive and destructive insect and destroy any, then Report it here.