As the cooler weather sets, we birders look forward to the arrival of a whole other suite of birds that winter here at the Herring Ponds.

In the fall many of our birds leave the Herring River Watershed for warmer parts. Yellow Warblers, Scarlet Tanagers, orioles, Ruby-throated Hummingbirds, Ospreys and Tree Swallows are among this group of fair-weather friends.

As the cooler weather sets, we birders look forward to the arrival of a whole other suite of birds that winter here, members of the duck tribe, who are flying south from northern parts of the hemisphere.

On Cape Cod Bay we begin to see skeins of fast-flying sea ducks called Scoters whizzing by. These sturdy sea ducks are heavy-bodied and mostly black. Red-breasted Mergansers appear, as do Common Eider by the thousands. The gregarious eiders can be well-seen in the Canal swimming in a giant gyre and feasting on mussels.

Here on the ponds, we see another set of at least 10 duck species that prefer fresh water ponds for their wintering spot. Great and Little Herring Ponds are favored habitat as they are 1) large, and 2) among the last to freeze up in winter, and thus act as a refuge.

Bufflehead is a small duck that can be seen on both fresh and salt water bays easily in the winter. They are most widespread in winter, when they move south to coasts and large bodies of water, particularly shallow saltwater bays. They breed near lakes in northern forests where conifers mix with poplars or aspens, in Canada and Alaska. Bufflehead nest only in tree cavities, using holes dug by Northern Flickers and sometimes Pileated Woodpeckers.

Many of you are likely familiar with the distinctive black and white pattern of the males, looking something akin to a tiny penguin. Adult male Bufflehead have a white body, black back, and a dark head with a large white patch that wraps around the back of the head. Females and first-year males are gray-brown overall with a smudgy, white cheek patch.

Bufflehead dive for aquatic invertebrates, crustaceans, and mollusks. They typically swallow their food while still underwater. Dives last on average about 12 seconds, typically staying on the surface another 12 seconds or so before diving again.

Bufflehead swim buoyantly, dive easily, and take flight by running a short distance on the surface. They fly low over the water and higher over the land. To dive, Bufflehead compress their plumage to squeeze out air, then give a slight forward leap and plunge powerfully downward. They hold their wings tightly against their bodies underwater and use only their feet to propel themselves. At the end of a dive, they may bob to the surface like a cork. 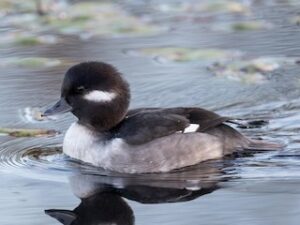 If you’ve ever tried to count a group of Bufflehead, you will find yourself waiting for members of the group to pop up out of the water, before disappearing again. They are rarely all up at the same time!

Bufflehead populations are stable and despite indication of declines in some areas, overall, their population increased between 1966 and 2014 according to the North American Breeding Bird Survey.