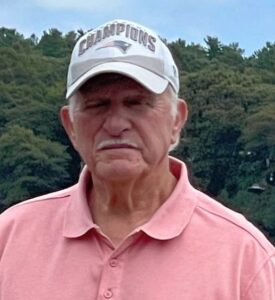 I wanted to write an article about fishing in our watershed. I knew that 376-acre Great Herring Pond is a favorite recreational fishing spot, and that the boat ramp is a popular spot to launch fishing boats, but I didn’t know anything about angling. Earlier in the summer, Joe Solimini, who lives on Great Herring Pond (GHP), had shown me a photo of a largemouth bass he had caught right off of his dock. I was hooked! Joe and his wife Barbara graciously invited us over to their house with a gorgeous view of the Pond, and over hors d’oeuvres, he unreeled 52 years’ worth of fish lore and knowledge.

My first question was about eating freshwater fish from the Ponds. “Catch and release only,” said Joe. I thought he was worried about mercury, but his reply was that due to the warm water, the flesh of the fish is mushy. Cold water is better for good eating fish. Joe likes to fish deeper, cooler waters, like off Cash’s Ledge, when salt water fishing. Relatively shallow—the average depth is just 18 feet—and clear, Great Herring Pond has no thermocline, said Joe, referring to the spread of temperatures from the surface to the bottom found in deeper ponds like Long Pond (100 feet).

Just to be clear, air-borne mercury was a big concern before controls were put in place to cut emissions. The good news for our fishermen is that the Massachusetts Department of Environmental Protection sampled Great Herring Pond for mercury contamination in 2016. The mercury results came back below the MDEP advisory level of 0.5 ppm. HPWA was asked to keep in mind that there is a statewide advisory still in place and that the fish sample did not include any large (old) specimens. Mercury tends to be higher in larger fish.

There are a LOT of fish in Great Herring Pond, one of the region’s largest bodies of freshwater. Joe said that freshwater gamefish are so abundant in the Pond that Fish and Game do not stock it (Long Pond is stocked). 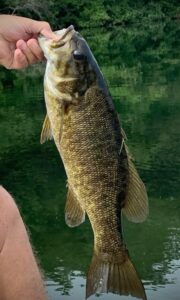 So, what species of gamefish live in GHP and LHP, and where are they caught? The largemouth bass is a beautiful olive-green fish, marked by a series of dark blotches forming a jagged horizontal stripe along each flank. This blotchy line distinguishes it from the smallmouth bass, which has no lateral line. Largemouth bass can weigh up to 10 pounds in our region, and the females are bigger than the males. Bass eat a diet of smaller fish: perch, bluegill, herring, shiners, suckers and darters.

Largemouth bass like a structured bottom where they can hide behind the structures for bait fish; these bass can be found anywhere in the Pond. Smallmouth bass prefer rocky bottom and like if off the point at Eagle Hill. Chain pickerel, a handsomely-patterned predatory gamefish, like grassy bottom found on the west side of the Pond. Pickerel are rare, but Joe caught two big ones this year. Overhanging trees are favorite places to fish as the fish like shady areas. Joe pointed out that there are two man-made tire reefs in the Pond, and that they form successful fish habitats. Anglers can find great smallmouth bass and white perch fishing around the sunken islands, ice-age relics, in the center of the Pond, just off the end of Trails End Cove Road.

Spawning of largemouth bass takes place in the spring season when the water temperature first remains continuously above 60°F.  Last April Joe and Barbara made a circuit of the Pond in their pontoon boat. The water was about 60°F and clear. Along the west side of the Pond, they could see about two dozen bass nests in the shallow water. Using their tails, the male clears debris from a big round area on the bottom to construct a nest. Once the nest is finished, he swims near the nest and waits for a female. When she shows up the fish swim together and spawn. The male will then guard the nest until the eggs hatch several days later.

Largemouth bass are keenly sought after by fisherman for the excitement of their “fight” and will pull hard when on the hook. Smallmouth bass put up an even better fight, according to Joe, and will jump out of the water. “Smallmouth will put on a show.”  “And fish are smart,” he added. “They know where to go for the structure that they can use to break off the line. They will head for a dock piling and wrap themselves around it to break the line.” Joe has a net at the ready on his dock for that event. 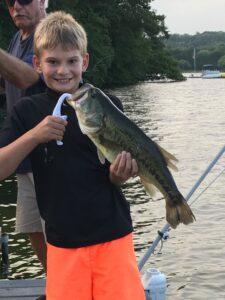 I asked Joe about American eel. I had recently read a book about these mysterious fish and was curious. Eels spend most of their lives in deeper water in the Pond until returning to the sea to spawn. Joe said he has not caught an eel in 25 years, but they used to catch them with hot dogs. His feeling is they are not as abundant as before. Eels have a very long and perilous journey to reach their distant spawning grounds in the Sargasso Sea in the south Atlantic.

Then there is a whole group of smaller so-called “pan” fish found in the Ponds: yellow perch, white perch, bluegill, pumpkinseed, white shiner, river herring, bullhead catfish, killifish and tessellated darter according to MassWildlife surveys. These are forage fish for the larger bass and pickerel.

Joe does ice fishing in the winter. “You can catch anything in the winter.” He has a hand auger and can drill a hole in the ice, go back to his house for a cup of coffee, and from the warmth of his house wait for the flag to go up signaling a fish on the line.

Little Herring Pond, though only 4 feet deep, is full of big fish, said Joe. He has a bass hunter boat with low gunnels. He loves the serenity of LHP, “full of lily pads, weeds and big fish.” There are no motor boats and you can drift with the wind.

Joe believes in keeping up the fishing tradition in his family. He fishes with his grandsons and granddaughter, and once a year does an annual fishing trip with his son. His favorite trip? “Definitely Alaska, for halibut and king salmon.” “We’re going to go one more time to Alaska.”