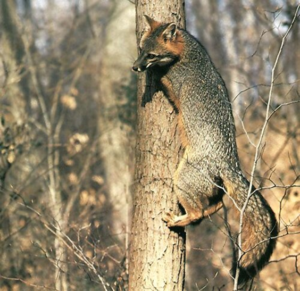 In our watershed it is much more common to see a red fox than its smaller cousin the gray fox. My last sighting of a gray fox was a few years ago late in the afternoon. A short-legged, grizzled-looking animal stood in the middle of the trail in Scusset Beach State Park, steadily eyeing my approach before it slipped away into the brushy woods.

The gray fox (Urocyon cinereoargenteus) is found in North and South America. They have salt and pepper colored fur with patches of white and orange around their faces. A gray fox is 10-15 pounds and is 3 ft long.

Gray fox are also sometimes known as the “tree fox” or the “cat fox”. Their pupils are oval shaped, rather than slit-like. These foxes are common, but very elusive and rare to spot in the wild. They are primarily nocturnal, but may forage during the day.

This amazing animal isn’t just a grey-colored red fox—it belongs to a different genus in the family Canidae, and has some unusual traits. Like a cat, its nails are retractable, and it can climb trees and jump from branch to branch. Their tails are long to help with balance. It’s more rarely encountered because it doesn’t wander as much and tends to stick to its forest territory.

Here’s how to tell you’re looking at a gray fox:

Interesting Facts About the Gray Fox

Despite looking like other foxes, gray foxes are actually quite different.

Tree Climbing – Unlike other canines, gray foxes can climb trees! The gray fox and the raccoon dog of East Asia are the only two members of the canine family that can readily climb into trees. Their climbing ability is extremely useful when escaping predators or hunting for food. But it is also risky behavior because they are not great at climbing down, and can sometimes get injured.

Opportunistic Omnivore – Unlike the red fox, the gray fox eats a surprising amount of plant matter. They are particularly fond of fruit, and will seek it out wherever it is available. However, mice and rats make up most of their diet.

Behavior of the Gray Fox

Gray foxes are monogamous, and pairs remain together for life. They form family groups with their offspring from prior years. The family is most active at night, dawn, or dusk. During the day, they retreat to their den, typically in a hollow tree or burrow. Gray foxes are very territorial. These home ranges are usually one square mile or even less.

Gray fox mate in February or March. Gestation lasts about 52 days with 3 to 7 kits born in April/May. The young open their eyes at 10 days, and will venture out of the den after about 4 weeks. At 10 weeks, they are usually weaned, with the father providing solid food for the entire family. They will all remain together until late fall, but will generally be solitary for most of the year.

Gray foxes are usually quiet animals. However, during mating season, the gray fox will sometimes give off a harsh, grating screech to attract its mate.

Perhaps you will encounter a gray fox on the trail. HPWA President Don Williams and family did just that one day last summer on the Comassakumkanut trail, and even managed a photo! 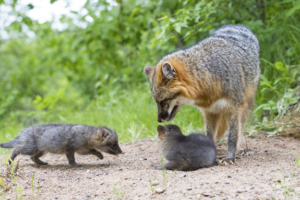