If you are of a certain age, like myself, when you were growing up you might have read “The Adventures of Old Mr. Toad” by Thornton W. Burgess. When my kids were little, I read them many “Frog and Toad” books. The toad characters, always illustrated wearing little jackets, were portrayed as lovable, loyal and a just a little bit homely. There’s something about toads that is both familiar and appealing. But literary toads aside, what are toads, really?

Like frogs, toads are amphibians. The skin of a toad is often thick, dry, and warty, enabling it to tolerate dry environments. Toad skin glands have secretions that make them unappetizing to most predators. Toads do not cause warts, but if you handle a toad, their skin secretions can be irritating if you rub your eyes.

Toads have short, stout bodies and stubby legs that cause them to hop instead of leap like frogs.

Toads are capable of burrowing into the ground to escape the heat of summer. During the winter they escape freezing conditions by burrowing backwards below the frost line.

American toads are generalists. They eat a wide variety of insects and other invertebrates, including snails, beetles, slugs, and earthworms. Unlike most toads, who wait for prey to come along and pounce on it, American toads can shoot out their sticky tongues to catch prey. You might have noticed that Mr. Burgess got that right in his cover illustration for “The Adventures of Old Mr. Toad.” They also may use their front legs in order to eat larger food. They grasp their food and push it into their mouths. One American toad can eat up to 1,000 insects every day.

Adult toads are mostly nocturnal, although juveniles are often abroad by day. When it rains, these toads will become active and can be observed eating worms and insects leaving their burrows and walking in front of an opportunist toad. These toads are ‘creatures of habit’ once they have a certain area they prefer to live within… an acre of wooded forest with water in proximity for soaking, a home with cool ledges and window wells; they commonly seek cover in burrows, under boardwalks, flat stones, boards, logs, wood piles, or other cover.

The main predators of American toads are snakes. One species, eastern hognose snakes, specializes on eating toads. Some snakes, such as garter snakes, are immune to the poisonous glands of American toads. When these toads are faced with a predator that is immune to their poison they inflate their bodies with air to make themselves more difficult for a snake to swallow.

Now, let’s meet two of the toads we commonly see or hear in our Herring Ponds Watershed, as described by Mass Audubon: 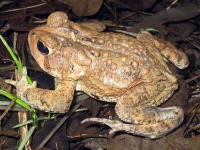 A member of the true toad family Bufonidae, this common species is brown with large warts and has a white belly with black dots. It can often be found on the forest floor, eating small creatures such as slugs and worms. c, and it lays long strings of eggs. It’s found across the state, except on Nantucket. 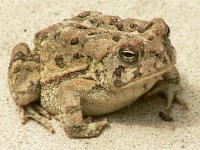 Another so-called true toad, this species looks a lot like the American toad. However, it has clusters of small warts, a mostly spotless belly, and poison glands that meet at the back of the eyes. It’s found in sandy areas near wetlands, and the female lays long strings of eggs in permanent water. Listen for the nasal “wahhh” call in spring and summer. It lives throughout the state except on Nantucket.