Here are some more photos of vintage postcards sent to me by Jim Smith, an active member. He received the photos from a friend and wasn’t sure of the time period they represent. However I found several very similar photos on the internet that were dated 1905 and 1910, so I think it is fairly safe to say they are from the early 1900’s.

See if you can figure out the spot they depict and where they probably were taken from. Of course much of the trees and landscape have changed over the past 100 years, more greenery in some places and much less in others with all the houses that have been built. If you know more about a view, please send me an email at geri3williams@comcast.net, and I’ll report it in the next newsletter along with some more photos.

If you have some old or new photos of our watershed and/or people recreating here, send them to me and I will share them in future issues. 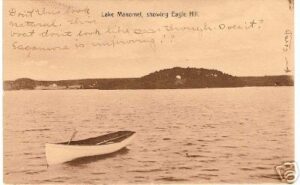 Boat with Eagle Hill in the background 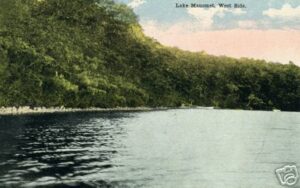 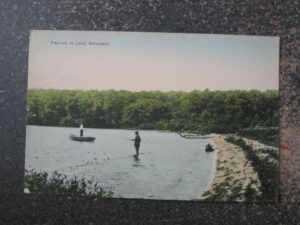